It has been an up and down few days.

Last weekend I updated a website and took it from dev to prod and in the process trashed the MX records.  Three days later I get the call asking “where are my emails?”  Damn.  Stupid rookie  screw up.  Easy fix but jeepers what a dumb thing to do.

Had probably one of the best client meetings of my life today.  We have the program manager, the purchasing officer, the IT manager, and the BA all in the room.  Everyone is on the same page.  Everyone wants to start with business level requirements and not jump to technology.  Hallelujah!  A rare client indeed.

My aunt is in town for heart surgery.

I was playing with my two year old grand daughter the other day. We had some marbles I found in the yard when we did the landscaping this summer.  One was blue cats eye and it was her favourite.  She took it home.  Later she kept asking her parents where it was and they didn’t really understand what she was asking for.  Then I get this picture. 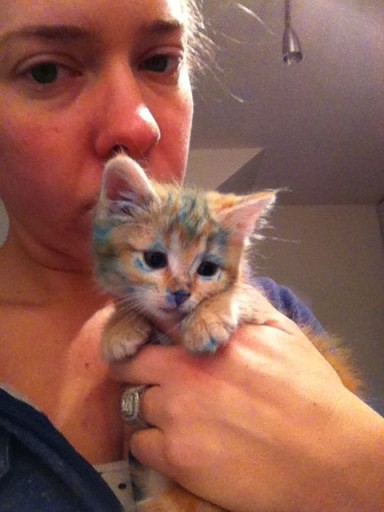 I took my truck into the shop to find the source of a squeal.  One new engine fan, thermostat housing, engine seal and three visits later I am out a few hundred dollars and still have a squeal.  Yeah, the other things were needed but come on already.